Let me preface all of this by saying that the following is just my opinion, and not the opinion of HeartSong Quilts or its brilliant owner/designer/glitterati, Ann Powers.

Just got back from Quiltcon in Austin, TX, and boy, was that illuminating.  We’ve been trying to get a handle on this “modern” quilt movement.  Everyone seems to have a different take on it.  We were hoping that hearing about it from the “horse’s mouth” would clear up our confusion.  Well—kind of.

There are clearly several camps in the modern quilt movement.  We heard from a couple of them.  Those who “birthed” this movement clearly have a view of what the movement is and should be, and made it clear what that is.  For those who organized the event, modern quilting is mostly an aesthetic and design thing.  If you don’t conform to those expectations, you are not making modern quilts.  Hello, quilt police!  They deigned to allow that those who have a “modern” sensibility could be considered “modern traditionalists,” but they were not modern quilters.  In fact, the judging of the show followed some pretty strict guidelines.  Modern quilts meant . . . well, what they defined “modern” as.  Now, that’s OK, I suppose.  If you want to join a group or club, you have to agree to be bound by their rules.  But, this should disillusion those who thought that being a modern quilter meant that there were no rules.

As I suspected all along, there are rules, and they are pretty strict about design elements and color.  No borders, no traditional blocks (unless they are distorted almost beyond recognition), lots of “negative space” (I got really tired of hearing that term—it appears to be the rallying cry of the movement), bright and “graphic” colors, minimalism, improvisational piecing, alternate grid structures, asymmetry, exaggerated scale, pixilization. 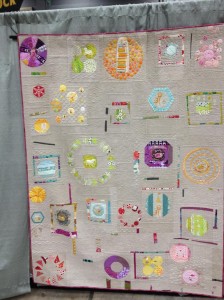 They specifically stated that being a modern quilter meant more than following the “modern” philosophy (no rules, etc).  In fact, one speaker who is very influential in the organization said that modern quilting is “more than a philosophy.”  There is a “specific quantifiable aesthetic.”

But wait. If you are well known, part of the “in” crowd, you can be modern without these characteristics.  We heard several well known and published quilters who made quilts with borders and modified log cabins and other blocks  which were recognizable.  It appears that who you know is a factor in whether you are considered a modern quilter or not.

The modern quilters claim that they are influenced by modernist and post-modernist movements in art, architecture and interior design.  I wonder how many of them actually are aware of and believe in the philosophy expressed in modern or post-modern art. Or, do they just like the look?  I think they like the minimalist appearance of these schools and of their quilts.  Giving them the benefit of the doubt on this issue, though, they deny they are creating art quilts.  But, a great percentage of the 228 quilts hanging in the show (600 plus entered, but did not pass muster in the jurying) were small wall hanging quilts. Modern quilters say they are not art quilters, that they believe in function as well as form, but  many of these quilts would only cover my left leg if I was watching TV.

I think there is a fair amount of arrogance and elitisim at work here.The stratified world of hip has reared its ugly head.   Now we not only have to fear the quilters who have “always done it that way,” and who tell us “you’re not doing it right,” but also those who tell us we just don’t get it, we’re not hip enough, not educated enough, don’t hang out with the right crowd.  I’m not sure which is worse, but I do know that it’s not good for quilting.  It is, however, a snapshot of our culture these days.  We’ve become class conscious and tend to put people in categories.  Just when we thought that quilting stripped away the barriers.  Don’t we just want to have fun?  Don’t we just want to do what we love, how we want to do it?  That’s me, folks.  Modern quilter?  Yes and no.  Modern traditionalist?  Why do I have to be labeled.  Aren’t I just a quilter?

Here’s the good news. You don’t have to be labeled.  I probably am not young and hip enough or creative enough  to actually create a modern quilt.  If you are, good for you.  But aren’t we really trying to tear down barriers?  Deep breath now and repeat with me—“I’m a quilter and I can make whatever I feel like making however I feel like making it, and I’m proud of it.” 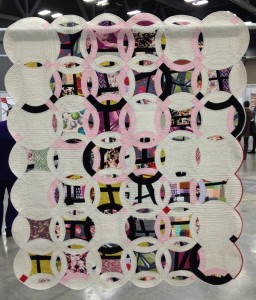